Ok we have one - here's an opportunity to have one - if you got a point of view about something and want to share it - here's where you do it.
Post Reply
10 posts • Page 1 of 1

It's been a while since I've spouted some verbal diahorrea; this time it's all about Bluemotion...

My car is currently in the dealer bodyshop for rectification of a faulty windscreen seal, following replacement of the same there last year. They were short of customer cars so I've been given the manager's own car instead. Unfortunately, the BMW bodyshop in Aberdeen is also the VW bodyshop so I have the joys of a VW Jetta Bluemotion. I've no idea what size of engine it has but I do know it's an oil-burner.

What can I say about it? It's white, it has 4 wheels, it gets me from A to B on my daily commute. and the fuel economy is bordering on unbelieveable. That last point has to be stressed. If the digital indicator is to be believed, it's getting 60+ mpg within 30 seconds of start up on a cold morning and reaching the national speed limit for an A-road. It's registering 150-200 mpg when cruising down the slightest of inclines where my B10 would be nudging 30mpg. I fully accept that this thing would cut my annual fuel bill by over 60%

Aside from the fuel economy, let me list the other positive aspects of it

Nope, I honestly can't think of any

Don't get me wrong; it's a perfectly acceptable form of transport for those who see a car as an alternative to public transport. Maybe I'm just being a snob but I can't get excited about swathes of black plastic and black fabric, even if the digital information centre between the dials is quite funky and informative - it gives instant fuel consumption and I'm therefore looking at it a lot (in astonishment)

In terms of driving dynamics, it feels like a kids toy boat in a bucket of porridge. Don't ask how the roadholding is because it doesn't give me the confidence to press on whatsoever. It's quiet and comfortable and can carry 4 people with their luggage. It's as fast as I'd want it to go and it has enough torque to provide some accidental wheelspin in the wet.

But does it excite me? No! Does it even interest me? No... other than wondering how the heck it can achieve three times the average economy of my B10 which is probably a similar size and weight.

I have considered getting a small commuting car in order to save my bigger engined cars the trouble and expense of getting me to work. However, even the numbers don't stack up when you consider that one of these would cost a large chunk of cash to buy. On the basis of 12k miles per annum, I'd be saving Â£2k per annum on fuel but losing far more in terms of depreciation and driving enjoyment. I just can't justify it.

We test drove a couple of VW vehicles a couple of years back - the Golf GTD and the Scirocco 2.0TSi. What can we remember of them? Oh yes, similar to you. Acres of black plastic, dull as the inside of a plastic bag and totally soul-less. The GTD handled well for a FWD car, but to spec as we wanted was Â£27k

and the 2.0TSi Scirrocco couldn't put the power down without leaving tyres behind. It was the dullest, daftest, most pointless coupe I'd ever been in ...and it has a fat arse when you look out through the mirrors

If we had bought the GTD, I'd be bored already and it would have been sold by now.

The Bluemotion has those horrid low rolling resistance tyres and some trick suspension...hence it rolls around a bit on the bends

We recently came to the conclusion that the majority of new cars just don't have any soul, and most look soooo alike it's hard to differentiate different manufacturers.
Current:

When buying a new car, the first question people used to ask how quick to got to 60. Now they ask what the MPG is.

What they don't ask is what trickery is involved to get there and how much will it cost to fix and service.

VAG diesels use 1L of oil per 1000 miles (and this is considered normal). That's a lot of money between services. Modern fuel pumps cost over a grand. The engine gets blocked with carbon. Turbo seals fail. You need to top up a tank of urea (any it's not cheap) at a major service.

However there have always been people that buy 5m of 'car'. They buy Vauxhalls, making their buying decision on whether they can plug in their iPod or fit the baby trolley in the boot, or whether it does 55 or 58MPG or fits in a certain tax bracket.

Can't get the dog in the boot of ours

Is something wrong with it

ade and liz flint wrote:
Can't get the dog in the boot of ours

Is something wrong with it

I didn't know you had a St Bernard

, surprising what you can get in the boot of a Roadster though

Re: Advances in car technology

Chas wrote:It's been a while since I've spouted some verbal diahorrea; this time it's all about Bluemotion...

Just had an interesting experience with A VW Bluemotion, this one was a Passat CC.

A friend from the states visited us with the VW she had just hired.
My drive is very steep, and when she drove in she parked about an inch from my front bumper

Getting off the drive was a nightmare, she gave up and got me to do it, first of all the PDC was going constantly, the combination of an Auto, electric hand brake and the hillhold it did not want to reverse, plus everytime I took my foot of the throttle it stopped itself

Being fueled by the devil, it would not rev

.
I finally got it off my drive by reversing with the hillhold full on, with lots of smoke.
Don't you just love technology

Give me petrol, and a car I can hold on the handbrake.
Top

And utterly soulless. And bland. And it has a horrible CVT gearbox.

So agree with all the above. Sod the fuel consumption. Get a car with soul.

My 1st car was one of these:

And it had more character than all the bluemotions put together.
Top

rincewind wrote:My 1st car was one of these: 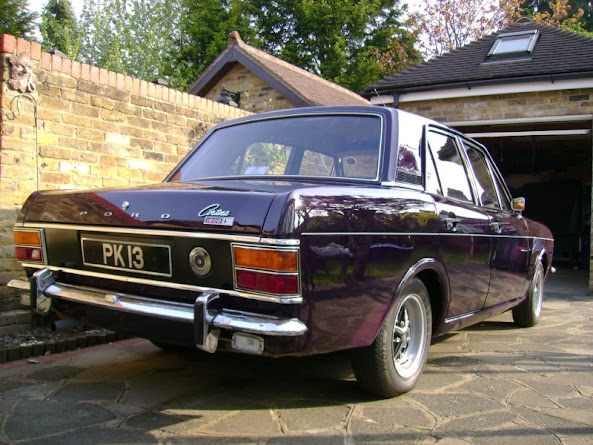 A huge fan of 1600E Cortina. One of my friend's had his one stolen

Oscar Wilde & Burkard Bovensiepen: I have the simplest tastes. I am always satisfied with the best.